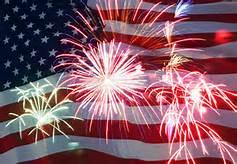 America is a nation fought for and built on the ideals of freedom and the earthshaking struggle to achieve such freedom, independence, and sovereignty transcends time. A day after signing the Declaration of Independence on July 2nd, 1776, John Adam’s wrote a letter to his wife and said:

The second day of July, 1776, will be the most memorable epoch in the history of America. I am apt to believe that it will be celebrated by succeeding generations as the great anniversary festival. It ought to be commemorated as the day of deliverance, by solemn acts of devotion to God Almighty. It ought to be solemnized with pomp and parade, with shows, games, sports, guns, bells, bonfires, and illuminations, from one end of this continent to the other, from this time forward forever more.

John Adams, who went on to become the second President of the United States, accurately assessed the significance and value to which future American’s would place on the official birthday or our beloved country.

For your protection, the City of Stanwood strongly advocates public awareness of Washington State fireworks laws and the laws that apply to the city, county, and state. Before you celebrate your Fourth of July with fireworks, be sure to research and educate yourself on the relevant fireworks laws in our area.

The City of Stanwood permits the ignition of fireworks between the following dates and times:

The Revised Code of Washington is the compilation of all permanent laws that are currently in effect in the United States, State of Washington. The specific RCW Chapter that outlines the states fireworks laws is RCW 70.77.

A few things to keep in mind when purchasing or lighting fireworks: