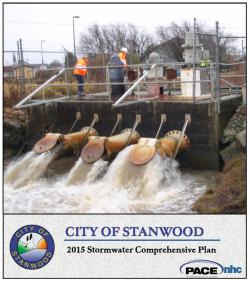 The purpose of this Stormwater Comprehensive Plan is to provide the City with a planning document that anticipates the need for compliance with various local, state, and federal stormwater regulatory requirements, most specifically the National Pollutant Discharge Elimination System (NPDES) Western Washington Phase II Permit (Permit) and allows the City to plan for, add, upgrade, and/or replace critical parts of the City’s system of natural and man-made stormwater facilities. One of the primary products of this stormwater planning will be the development of an updated, prioritized list of stormwater Capital Improvement Program (CIP) projects that reduces flooding and property damage throughout the City.

Stormwater (sometimes called Surface Water) is the result of rain and melted snow and ice that runs off surfaces such as rooftops, paved streets, highways, and parking lots, and other impervious surfaces. As the water runs off these surfaces, it picks up pollutants such as oil, fertilizers, pesticides, trash, and animal waste. The water may flow directly into a local stream, wetland, lake, or other waterways, or the water may flow into the storm drain and continue through pipes until it is released untreated into a local waterway. Stanwood’s storm drain system feeds into Port Susan and Skagit Bay.

Untreated storm water is generally unsafe because it contains toxic metals, organic compounds, bacteria, and viruses. Residential storm water runoff may include pet waste, vehicle fluids such as oil, gas, and antifreeze, and other hazardous solvents. Industrial storm water runoff may result from chemical spills and washing commercial vehicles and allowing the dirty water to go directly into the storm drain system. Waste from materials and equipment used in construction can wash into the City’s storm drain system.

It is a violation of City code to discharge any contaminates into the City’s storm drain system or surface/groundwater.